Kids Need a Mexican for a Class Project 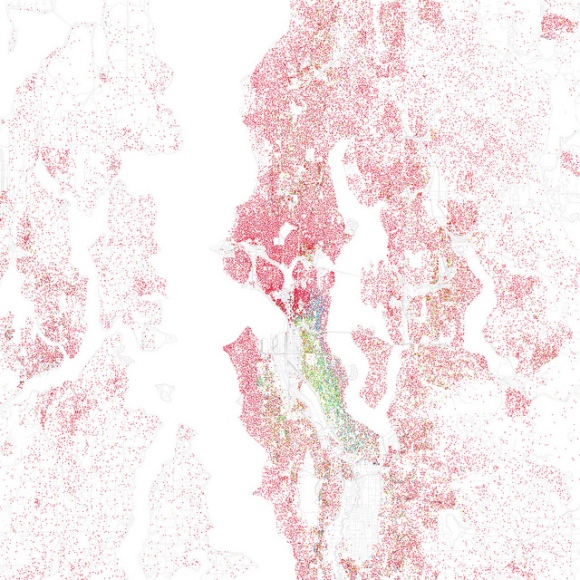 My kids have been attending a Spanish immersion school since they were in kindergarten. They’re big 8th graders now, about to move into high school, where the “immersion” part of school will change, so that they’re essentially only doing a single foreign language AP class. So they’re “graduating” from the immersion portion of the program.

For their final project they have to interview a native Mexican, who speaks Spanish. It’s just a crazy project for so many reasons. A Mexican? We live in Seattle. The photo above is an aerial map of Seattle. Red dots represent where all the white people live. Orange dots represent Hispanics. Where are we going to find a Mexican?

Plus, the assignment is just so ethnically specific. Meanwhile, Seattle is so liberal and progressive people tend to discount ethnic/racial differences, so this is putting ethnicity squarely into focus in ways I haven’t really thought about, and that make me feel somewhat uncomfortable.

Why not just task them with interviewing someone who doesn’t speak English? They’re in a Spanish immersion class, so it’s hard to imagine they’re going to interview a Russian or a Texan or something.

We tried to coordinate a Skype interview with family friends from Mexico who we haven’t seen in years, but the logistics and technical challenges were too great to overcome. We have all sorts of ethnic friends, but no Mexicans. It was very frustrating. Finally, end of semester approaching, they loosened the requirements to any Spanish speaking culture, which opened up the door to my son’s in-laws, who are from Cuba and Costa Rica. Hooray for in-laws!

My kids interviewed Tim’s mother-in-law, who was kind enough to stay up late and chat with Aaron and Kennedy, who both got a HUGE case of the shy-kids, and proceeded to chat for about an entire two minutes. As it turns out, that was enough. Interview accomplished.

So. Major kudos to my daughter, Carry, who took a huge part coordinating the effort, despite a full-time load at university and two little ninas of her own to care for. Thank you Carry! And big thanks to your mother, Miriam, for taking Aaron and Kennedy and their school project seriously.

We really love you guys!

Will be interesting to see what the interviews look like. Not just Aaron and Kennedy’s, but the entire class. We were not the only ones that had a hard time. I know of at least one family who went to a Mexican restaurant and interviewed one of the wait staff. The assignment required the students to get pictures of the people they interviewed, and when the cameras came out, the restaurant staff all got a little antsy. Does that just seem — I don’t know — incredibly awkward?

3 thoughts on “Kids Need a Mexican for a Class Project”